Officers and Regiments from Portage County

Out of the 320,000 Union soldiers from Ohio, about 2,070 of them were from Portage County. Most served in local regiments, but they also enlisted in units throughout Ohio and in at least 20 other states.

These regiments had high enlistments from Portage County and nearby counties:

Seventh Ohio Volunteer Infantry
Mustered out in Washington D.C., July 1864
273 men died from battle and disease
Portage County enlisted 343 men for the 7th, but only 60 returned; some reenlisted in the 5th OVI

Battery A, First Ohio Light Artillery
Mustered out in Cleveland, Ohio, July 1865
Marched 3,000 miles
Traveled 2,500 by boat or train
48 men died in battle or from accident or disease 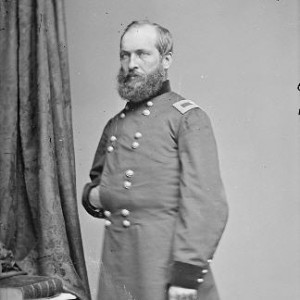 Many officers from Portage County went on to become prominent political figures after the war. Perhaps the most famous were generals Ulysses S. Grant, James A. Garfield, William McKinley and Rutherford B. Hayes, all of whom became President of the United States.

However, Portage County was home to several other important and influential Union officers during the war. William B. Hazen, already a local hero from his role in the Indian Wars, was a close friend of Garfield. After his first major engagement with the Confederates at Shiloh, Hazen was promoted to Major General.

Prominent Portage County business man Erastus B. Tyler was also a key player in the war effort. A successful merchant before the war, Tyler was made Colonel of the 7th Ohio Volunteer Infantry when war began and recruited most of the men who made up the 7th. Tyler made Major General by 1863 and went on to command the defenses in Baltimore, Maryland.

William Stedman, of Randolph, a fervent abolitionist, achieved the rank of Brigadier General and headed the 6th Ohio Cavalry. While in Virginia, Stedman befriended a young runaway slave named Eugene McRice and sent him back to Stedman’s farm in Randolph. After a short time, McRice enlisted in the U.S. Colored Infantry and fought at Petersburg.

A number of other Portage County men became officers of U.S. Colored units. Dozens of others served at lower ranks, such as colonel and captain.