He died less that three years after his enlistment ended, having never fully recovered from illnesses suffered during the war. Photos courtesy of Mantua Historical Society. 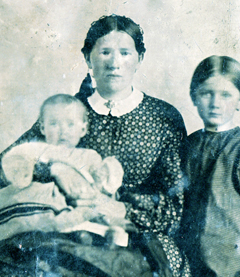 Ebenezer Bissell of Mantua was married and had two young children when he enlisted in Co. A of the 42nd Ohio Volunteer Infantry.

Bissell, from Mantua, was 28 years old, married and the father of two children when the war broke out. His youngest daughter was only two months old when Bissell joined James Garfield in Co. A of the 42nd Ohio Volunteer Infantry.

Known as ‘Cap,’ Bissell and the 42nd spent most of the war in mosquito-infested areas in Mississippi and Arkansas around the Mississippi River. He was constantly ill, and he complained often in his letters of being homesick and depressed. He spent weeks in a local hospital and often was too sick to march, riding in a supply wagon instead.

Bissell also kept a diary, and between it and his letters home, one gets a fascinating close-up view of infantry life during the war. His letters dealing with the siege and capture of Vicksburg are especially insightful.

He was mustered out in September 1864 after spending three years in the military. But the illnesses he grappled with during the war lingered. He died in June 1867. Just a few months later, his third daughter was born, never to know her father.
Bissell is buried in West Lawn Cemetery in Mantua Center, Ohio.