Gilbert was a young blacksmith in Edinburg when the war broke out. He enlisted in Co. D of the 6th Ohio Volunteer Cavalry in September 1861 and was promoted to Full Farrier a few months later.

Blacksmiths did not participate in all battles or skirmishes, but Gilbert’s letters indicate he saw a fair amount of action. In one letter, especially, he talks about bullet holes in his hat and “laying low” two Rebels with an old sword his brother had given him.

In the fall of 1863, the 6th Cavalry was engaged in constant skirmishes with Confederate cavalry in Virginia. On Nov. 15, Gilbert and two other farriers were getting supplies near their camp at Fayetteville when they were captured.

Gilbert was sent to Libby Prison in Richmond where he spent several months before being transferred to a new prison the Confederates had built in Georgia.

George Gilbert of Edinburg enlisted as a farrier in the 6th Ohio Cavalry. He was captured and sent to Libby Prison and then to Andersonville, where he died in July 1864. He is buried in Andersonville National Cemetery. Photos courtesy of Portage County Historical Society and The National Archives. 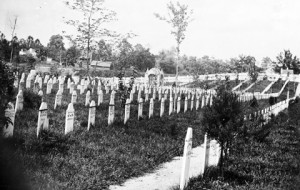