Bloomfield and a number of his friends from the Randolph area enlisted in the summer of 1861 in Battery A of the 1st Ohio Light Artillery, commanded by Capt. Charles Cotter or Ravenna.

Battery A saw extensive duty in a number of major battles including the Atlanta Campaign and the Battle of Franklin, Tenn. Bloomfield was a caisson driver.

His letters home are a treasure-trove of fact and opinion. He covers a wide variety of topics, including African American soldiers, camp life, and Lincoln’s “assinators” — he thought they should be hung.

At the end of his three-year term, he reenlisted in the 1st Ohio and served until his unit was mustered out in July 1865.

Bloomfield returned to Ohio and married Elmira Dixon in 1866. He worked as a farmer in the Randolph-Marlboro area until his death from a stroke in 1895. He is buried in Marlboro Cemetery in Stark County.

Alpheus Bloomfield, of Randolph, served four years with Battery A of the 1st Ohio Light Artillery. 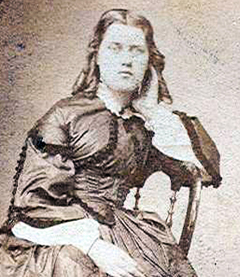 After the war, he married Elmira Dixon and worked as a farmer. Photos courtesy of Kathy Foster, Platte City, Mo. 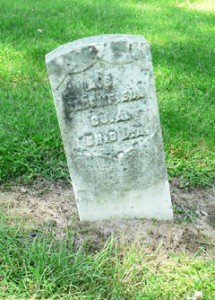