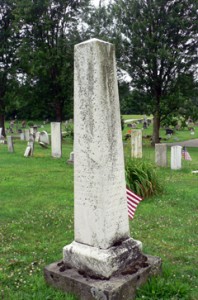 Bard graduated from Hiram Eclectic Institute in 1860 and was teaching in New Philadelphia when the war began. In June 1861, he enlisted in Co. F of the 7th Ohio Infantry and was soon promoted to first sergeant.

In 1862, however, he became ill and was discharged on a medical disability. Bard was not pleased. After six weeks of convalescing, he joined Co. I of the 104th Ohio and was quickly promoted to captain.

During the war, Bard wrote long, philosophical letters to a female friend in Brimfield, Alice Underwood. His letters cover a wide range of topics, from the war, to his superior officers, to African Americans, to Copperheads, to the meaning of life.

Bard’s company in the 104th was at the Battle of Franklin, Tenn. in November 1864. While walking along the battle line during the fight, rallying his men, he was shot. Some accounts say in the head; some say in the bowels. When Union forces withdrew to continue their trek to Nashville, Bard was left behind. A family from Franklin took him in and cared for him, but he died three days later.

His brother, Rudolphus, made the journey to Franklin and brought Bard’s body home. He is buried in Rest Land Cemetery in Brimfield.