In Portage County, Ohio, the issues of slavery and the role of Blacks were no less heated than in the rest of the country. Differing views could tear apart families and churches, riots were not uncommon. Generally, the people of Portage County were opposed to slavery, and their active involvement in the underground railroad serves as evidence of this. But, even among those who upheld the belief that Blacks should be free were torn about the place that Blacks should fill within society. In Portage County, some blacks like Henry and Rebecca Brantley were able to find the freedom and happiness they were looking for, while others like Frederick Loudin left Portage County because of the discrimination that he faced here.

The Brantleys
A towering granite monument stands in Ravenna, Ohio, dedicated to the struggles of Henry and Rebecca Brantley. “Emancipation” is carved on the front, decorated a sculpture of an extended hand breaking free from a manacle. The rest of the inscription reads:

“Henry and Rebecca Brantley. Henry was born in May 1825 and died April 15, 1888. Rebecca, his wife, was born in August 1833 and died October 26, 1880. They were born slaves near Clarksville, Montgomery County, Tennessee and married at Springfield Missouri. Fugitives from bondage, they came to Ravenna August 28, 1862, where they lived honest and industrious lives.”

Although the Brantleys were born into slavery in Tennessee, they were allowed to marry. After their owner’s death, the two were separated and sold, living apart for nearly a decade before they were reunited. With the help of Union Army Captain Seaton. The Brantleys relocated, to Seaton’s hometown of Ravenna, Ohio. Henry became a handyman and cared for the livestock of Portage County Judge C. A. Reed. Rebecca became a domestic servant.

The actual origin of the Brantley monument is in question. Some say money saved by the couple was used to erect it; others say the Ravenna residents liked them so much they donated the money. However, the caliber of the monument makes it unlikely that the Brantleys could have saved enough to have it built, and the racist tension in Portage County makes it unlikely that all of the town’s people would have donated the money.

Frederick J. Loudin
Frederick J. Loudin was born to free parents in the late 1830s. His family moved to Ravenna in hopes that their children would be able to attend a quality school, however, they continued to experience racism. Once Loudin graduated from school, he applied to Hiram College, where his father donated money, but the school refused to admit him because of his race. 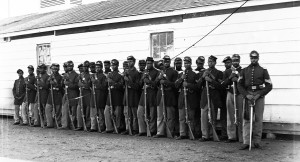 Though discouraged, Loudin then began training as a printer, but no newspaper would hire him. For a while, he worked for an abolitionist newspaper, and was eventually offered a position in the literary department. But, he turned it down because he did not agree with the views of the paper’s editor.

At 20 years old, Loudin moved to Pittsburgh to get away from the discrimination he experienced in Portage County. There, he married Harriet Johnson, and four years later, just after the Civil War’s end, they moved to Memphis, Tenn. In Memphis, Loudin learned the organ and began teaching a choir, something he was unable to do at the United Methodist Church in Ravenna. At this time, he learned of the Fisk University Jubilee Singers and wrote to their leader George White. White came to hear Loudin sing and invited him to join the choir. Together, White and Loudin, spent the next few years with the troupe touring Europe.

Through this experience, Loudin was able to accomplish what his skin color had prohibited in Ravenna, Ohio. He became a “champion of his people” speaking against segregation and discrimination. Even his new position had setbacks, however, as Loudin’s stance on these issues put him at odds with the administrators of Fisk University, though, who then turned against the troupe and disbanded it in 1879.

Loudin would eventually start his own group and continue to tour the world for the rest of his life. In addition to his music career, he was actively involved in political and business pursuits. He patented two inventions, one being the key ring. In 1879 and 1893, he served as a delegate to the national Conference of Black Men, and he joined Ida B. Wells-Barnett and Frederick Douglass in advocating for the representation of African Americans at the World’s Columbian Exposition in Chicago. In the fall of 1902, he collapsed while on tour in Scotland and was confined to a wheelchair. He died soon afterward at his home in Ravenna.

Jonathon Ramsey
The story of Jonathan Ramsey provides yet another dimension to the situation of Portage County blacks during the time of the Civil War. Ramsey earned his freedom when he was around 19 years old when his master offered him the opportunity to purchase his freedom through labor. In the early 1850s, he worked on an Ohio River steamboat, and eventually made his way to Franklin Mills, Ohio (Kent). Here he worked as a laborer in a glass factory and was later employed by Marvin Kent. When the war broke out be offered up his services, but African-Americans were not welcome until after 1863. In 1864, he enlisted with Company D, 25 Regiment of the U.S. Colored Infantry. After training in Pennsylvania, they the company was split among garrison duty in North Carolina, New Orleans and Florida.

Ramsey was discharged from the unit in December of 1865, and at this time, he rejoined his family in Kent, Ohio. The Kent Courier once called Ramsey, “Kent’s only colored pioneer.” While a resident of Kent he was a member of the Methodist Episcopal Church of Kent and the A.R. Day Post, Grand Army of the Republic where he was the only African-American member. By 1902, his health had rapidly deteriorated so he left Kent for a Soldier’s Home in Sandusky, Ohio, but he returned to Kent every year in May for Memorial Day. His body is now buried in Standing Rock Cemetery, Kent Ohio. He was the first African-American to be buried here, where a striking tombstone, Civil War veteran’s marker and American flag serve as remembrances of his life and actions.

Relative Freedom in Portage County
The stories of these African-American residents of Portage County all share one common thread. They have been regarded since their deaths of symbols of freedom and emancipation. Their life stories, however are very different. While Loudin struggled to create the life he wanted in Portage County, never being allowed to participate in the church choir or get a job with a newspaper, Ramsey and the Brantleys enjoyed relative success in the county. Maybe Loudin faced more opposition because the jobs he sought were not those commonly associated with blacks, while the Brantleys continued to hold service positions that may have been more “acceptable” for their perceived position in society.