More than 2,000 Portage County men fought for the Union Army. Three of them became “official” heroes.

Newton H. Hall, John H. Ricksecker and Orion P. Howe received the United States Medal of Honor, an award to soldiers who displayed the highest level of bravery and patriotism.

The idea for the Medal of Honor was established in the Navy. General Winfield Scott, of Mexican War fame, having disapproved a Senate proposal to create such a medal in early 1861. However, soon Presidential Lincoln signed a provision creating a medal for those soldiers who “shall most distinguish themselves by their gallantry in action, and other soldier-like qualities, during the present insurrection.” The Civil War would be the very first time this new medal would ever be bestowed.

Hall was the most prominent of the Portage County medal winners. Born in 1842, he grew up on his parents’ farm in Brimfield. When the war broke out in 1861, Hall enlisted as a private in the 104th Ohio Volunteer Infantry. At the fierce Battle of Franklin, south of Nashville, Tenn., the 104th played an important role in charging the Confederate division commanded by General Patrick Cleburne.

Hall was apparently in the very thick of the fray, charging in and capturing at least one of the Confederate battle flags. For this, he was awarded the newly established Medal of Honor several months later, by President Lincoln himself.

Also present at the Battle of Franklin, Ricksecker was praised for his “extraordinary heroism” and the capture of yet another Confederate battle flag. He was awarded the Medal of Honor on February 3, 1865.

But perhaps the most fascinating and touching case remains that of Orion P. Howe. 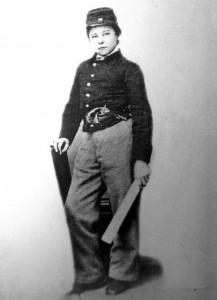 Although born in Portage County, the patriotic twelve-year-old enlisted as a drummer boy in Illinois in the 55th Infantry. Part of General Sherman’s Yazoo Expedition, the 55th saw a fair amount of action before reaching Vicksburg, Miss. Here, explosive fighting erupted in what has been called the turning point of the war.

Howe would do more than beat on his drum. Documents show that he fought alongside the soldiers when his regiment ran out of ammunition and began to lose ground. On assessing the situation, their commander directed a soldier to be sent to General Sherman asking for more cartridges.

Orion Howe volunteered for the job.

The fire was thick – the fighting was at its height. Eyewitnesses recounted that Howe “ran through what seemed a hailstorm of canister and musket-balls, each throwing up its little puff of dust when it struck the dry hillside. Suddenly he dropped and [our] hearts sank, but he had only tripped. Often he stumbled, sometimes he fell prostrate, but was quickly up again and he finally disappeared from us, limping over the summit.”
By the time he reached Sherman’s tent Howe had been severely wounded – a musket ball plowing through his leg.

However, Howe struggled on until reaching the general and quickly relayed the request for more ammunition. Howe did not leave the field until the needs of his regiment had been made known to Sherman. He later received the Medal of Honor for his valor and dedication.

Though all soldiers from Portage County fulfilled their duties faithfully, these three brave souls will always be remembered as our own champions. It was for acts of bravery like these that the Medal of Honor was first invented – and none were more deserving than these brave soldiers of Portage County.