Buel Whitney provides spiritual counsel to comrades on the battlefield

In addition to the soldiers, doctors and nurses who volunteered for the Civil War, nearly 3,000 chaplains served alongside Union forces. At least one was from Portage County.

Buel Whitney, a native of New York, was 42 years old and living outside Franklin Mills when the war broke out. In 1862, he enlisted as a private in the 104th Ohio Volunteer Infantry. By the end of the war, he had become a well-respected chaplain in the regiment.

Chaplains of the Civil War

According to old militia laws, military chaplains had to be an ordained minister of a Christian denomination. Each regiment would have a chaplain in the field, while other chaplains also served in hospital or post positions. Regimental chaplains often served alongside the soldiers on the front lines, performing multiple duties: fighting, carrying for the wounded and serving as a spiritual leader.

The chaplains received pay and allowances equal to that of a captain in the cavalry. For the Union this meant $100 per month, two rations per day, stationery materials, an authorized uniform (a black wool coat, black trousers, black shoes, and a brimmed hat), and a tent. They received no training, supervision or ecclesiastical supplies.

Being a chaplain was not without its dangers. As the 104th moved with Sherman’s army toward Atlanta, Whitney was captured near Burnt Hickory in late May 1864.

A fellow member of the 104th, J. W. Gaskill of Alliance, Ohio gave this account of Whitney’s capture and the confusion it caused for both sides in the war.

“Word reaches us that during our advance toward Atlanta, Chaplain Buel Whitney was captured by the enemy’s scouts. For the past few weeks we have seen but little of our chaplain who is kept busy while aiding in looking after sick and wounded soldiers dropping from the ranks every day. . . . It seems that for the purpose of reaching some point on the line, the chaplain borrowed a mule from a wagon master and while on his way lost his bearings and wandered outside the lines and is captured by rebel scouts. 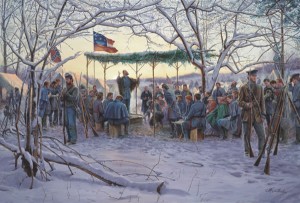 “Equipped, as he was, with wagon master’s mule, saddle and saddle bags, and without evidence that he bore the rank of a commissioned chaplain, the rebel colonel before whom he was taken was not disposed to accept his story.”

The confusion revolved around whether Whitney was an “official” chaplain or whether he was a regular soldier pretending to be a chaplain.

According to Gaskill, Whitney was already serving as chaplain of the unit when he was captured but lacked evidence of his commission. Another account by regimental historian, Nelson A. Pinney, however, claims that Whitney didn’t receive his official commission until after his capture near Burnt Hickory.

Even though prisoner exchanges had been sharply curtailed by mid-1864, Whitney’s case presented a problem for the exchange officers for the Union and the Confederacy. If Whitney was a private in the infantry, the swap would be one for one. If he was a chaplain, there would be no exchange and he would just be set free.

The Official Records of the Civil War indicate that Whitney, indeed, was not an “official” chaplain when captured, although he had been acting in that capacity for some time. Clearly, as he was probably twice the age of most men in the regiment, he had taken on the role of chaplain. Even the exchange officers refer to him in their discussions as the “Rev. Mr. Whitney.”

In early September 1864, Whitney was exchanged for one Southern private. Within a day or two, he received his official commission as a Union chaplain. Whitney made an impression on the men during his service with the 104th. He served as chaplain until June 18, 1865 he delivered a farewell sermon and message to the troops before they were mustered out and began their journey home.

As Pinney notes, Whitney “was a plain, good man, and endeared himself to all the boys by his careful nursing when they were sick, by his good and timely counsel and by his excellent Christian example.”

After the war, Whitney returned to Franklin Twp. where he worked as a teacher and a farmer until his death in 1875. He is buried in Standing Rock Cemetery in Kent. His grave marker reads “Chaplain of the 104th Regt OVI.” Whitney’s wife, Almira, served as a nurse in the war. 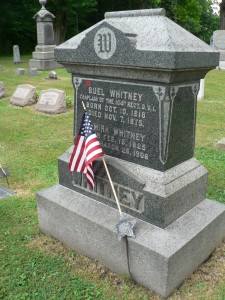